GBM Works has developed a technology that will revolutionize the way monopiles will be installed. Engineered to be superior to an impact hammer and a vibratory hammer on driveability and noise, and comparable with vibratory hammer on lateral bearing capacity.
The technology is a combination of 2 well known principles in the industry: vibratory driving and water injection. GBM developed this combination and applies it in in an efficient manner.

The noise generated with pile driving is among else dependent on the dimensions of the pile, the stick-up length in the water and the hammer energy. All these factors increase as we move towards larger wind turbines and deeper waters.
GBM Works’ method answers the industry need for a silent installation method, whether for marine life or to reduce piling nuisance on the coast, that is capable of driving XXL monopiles to target depth without the compromising lateral bearing capacity.

Why not only use a vibratory hammer?

Vibratory hammers do deliver certain advantages when used alone: they are fast when soil conditions allow them, are relatively silent compared to impact driving and can reduce the fatigue damage to the pile during installation. However, when dense sands or stiff clays are encountered, an excessive amount of power is needed to drive the pile to target depth, or more likely, a refusal occurs. These refusals are also hard to predict with currentlyAavailable software.

GBM solves these short comings by adding a jetting machine to the vibratory hammer that will operate inside the pile and near its tip. This decreases the soil resistance on the inside while leaving the outside soil untouched. The jetting machine settings can be adjusted to accommodate for different soil types such as clay, sand etc. Based on a test program of the method on different soil compositions carried out in its own laboratory, GBM Works has been able to build a simulation model with which it can make driveability predictions and optimize machine settings. These first tests confirmed the models and reveal an increase pile installation speed. The limits of the jetting machine are at boulders and rock formations.

The commonly heard hesitation of using jetting technology in combination with monopile installation is the yet unknown impact on the lateral bearing capacity. The axial bearing capacity is of less relevance due to the low weight of a wind turbine compared to the lateral loading from waves, current and wind. The Vibro-Jet technology delivers a foundation with similar lateral bearing capacity characteristics as normal vibratory driving. The reasoning is as follows; the lateral capacity is obtained from the soil outside the pile and some base shear. The water injection only occurs on the inside of the pile, fluidizing the complete interior. By actively equalizing the pressure on the inside and outside of the pile, waterflows underneath the tip of the pile are eliminated, which prevents the soil outside the pile from being disturbed.

GBM’s development projects and SIMOX will lead to the Technology Qualification of the Vibrojet® for the installation of monopiles offshore. DNV has been contracted as the certifier and the certificate is expected on the first quarter of 2023.

GBM is looking for innovative Developers and Contractors that are willing to challenge the existing installation methods and bring a more sustainable alternative to the market. If you are interested in more information, please contact Marcelo Werneck, Business Development Manager at m.werneck@gbmworks.com or +31623407167. 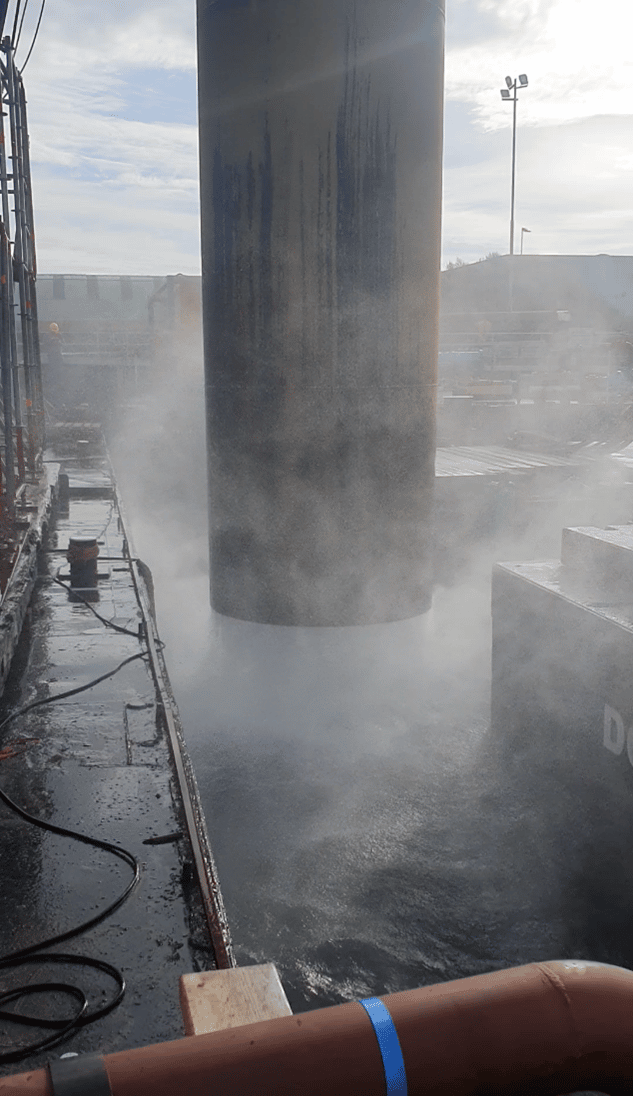 We use cookies on our website to give you the most relevant experience by remembering your preferences and repeat visits. By clicking “Accept”, you consent to the use of ALL the cookies.
Do not sell my personal information.
Cookie settings ACCEPT
Manage consent

This website uses cookies to improve your experience while you navigate through the website. Out of these, the cookies that are categorized as necessary are stored on your browser as they are essential for the working of basic functionalities of the website. We also use third-party cookies that help us analyze and understand how you use this website. These cookies will be stored in your browser only with your consent. You also have the option to opt-out of these cookies. But opting out of some of these cookies may affect your browsing experience.
Necessary Always Enabled
Necessary cookies are absolutely essential for the website to function properly. These cookies ensure basic functionalities and security features of the website, anonymously.
Functional
Functional cookies help to perform certain functionalities like sharing the content of the website on social media platforms, collect feedbacks, and other third-party features.
Performance
Performance cookies are used to understand and analyze the key performance indexes of the website which helps in delivering a better user experience for the visitors.
Analytics
Analytical cookies are used to understand how visitors interact with the website. These cookies help provide information on metrics the number of visitors, bounce rate, traffic source, etc.
Advertisement
Advertisement cookies are used to provide visitors with relevant ads and marketing campaigns. These cookies track visitors across websites and collect information to provide customized ads.
Others
Other uncategorized cookies are those that are being analyzed and have not been classified into a category as yet.
Save & Accept